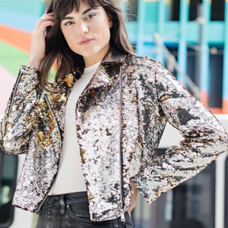 FABULOUS FURS
MEGASTAR MOTO
•••••
expect to light up any room, restaurant or theater in our megastar moto!
Add to cart
$249.00

A little over 30 years ago Donna Salyers made her first faux fur coat. The sketch, the fabric, the style, and every stitch from neck to ankle. She couldn’t afford the real deal, but she could create, sew and tailor like only her grandma taught her. Scheduled to be on a TV show (based on her fashion sewing newspaper column) in New York, she was determined to go in style, with a hand-made, full-length “mink” capable of fooling the finest fashion houses.

Sewn with Soul
A seamstress by age seven, it’s no surprise Donna’s debut into faux craftsmanship was a huge success. After hearing a Paul Harvey broadcast about a company that skinned cats to be used as “mink,” the animal-lover in her knew this was her calling. She began selling faux fur coat kits – drafting the patterns, sourcing the finest faux furs in true entrepreneurial-style from the basement of her home. From her basement workshop and a garage filled with faux fur, her business began to take flight.

Tailored to Perfection
As home sewing declined and the demand for coats made by Donna increased, Fabulous-Furs evolved into a ready-to-wear business. Donna alone was the “ready-to-wear” department. But as word spread, and her coats were discovered in Hollywood by animal rights activists, such as Loretta Swit (of M*A*S*H), Fabulous-Furs took on a life of its own. With a team of seamstresses now on-staff, Donna had to make sure every coat had the same quality in stitching, level of meticulous detail and dedication to craftsmanship, as if she were doing it herself, so she created a series of quality checkpoints, known today as ‘Donna’s 20-point perfection inspection’.

Made in Covington. Worn Around the World.
In 2003, Fabulous- Furs moved to its current headquarters in Covington, Kentucky. The entire second floor became a sewing workroom where a team of cutters, sewers, quality inspectors, work alongside Donna to bring her vision and faux fur mission to life. Fabulous-Furs celebrity status and international appeal continues to grow – from Sports Illustrated to Vogue to Oprah herself – stretching from Broadway to Rodeo Drive to Dubai and just about everywhere in between, 46 countries and counting!

Like Mother, Like Daughter
Donna’s daughter Amanda joined the company in 2005 and started the Fabulous-Furs Wholesale Division. After landing a meeting with Peter Nordstrom, Fabulous- Furs was off to Fashion Week to meet with Nordstrom buyers. Saks Fifth Avenue and Neiman Marcus soon followed. Amanda has grown the Wholesale Division to over 4,000 retail locations, boutiques, hotels and casinos. Bringing fabulous faux fashion to some of the world’s finest locations.

Giving Back & Looking Ahead
As a woman who has worked hard to get where she is, Donna believes in giving back to her community. She’s donated countless coats, scarves and hats to children’s charities and shelters over the years. She is happy to have provided many jobs for so many people for 30 years. She’s very proud of the thousands of animal lives saved. Her vision for the future is one of a fur-free world. With mega brands becoming increasingly against using real fur, she’s seen the fashion industry come a long way. She’s thankful that Fabulous-Furs has made such an impact in initiating and moving faux fur fashion forward.

Signup for our newsletter

No thanks, I want to keep shopping.